Richard Stallman was the first person to introduce open source software to the public through the Free Software Foundation he founded in 1985. The organization is still a globally active promoter of free software. In 1989, Stallman wrote the GNU GPL license that encapsulates the idea behind open source code. Later on, e.g., the core of the Linux operating system was licensed using the GNU GPL license. Originally, open source software emerged from academic circles but because of its success, large companies and commercial actors have also taken note of it.

A Definition of Open Source

The Open Source Initiative (OSI) has determined a number of criteria for assessing open source licenses (Open Source Definition). Licenses that fulfill the definition of open source may become OSI certified. OSI certified programs can be marked with a special symbol that creates the assumption that the program fulfills certain minimum requirements determined by the association. Thus, the definition serves as a guarantor of quality of sorts. 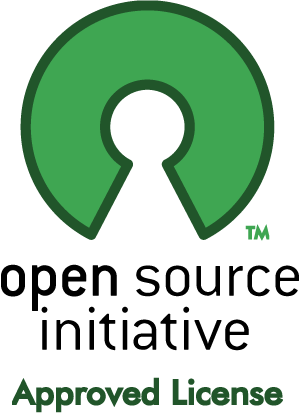 The key points of the definition of open source include:

The requirements of the definition are based on copyright. Copyright gives the exclusive right to copy, distribute and alter the work. Open source license allows limited exploitation of these exclusive rights. The key idea is that a new software product can gain users and developers all around the world more rapidly, if the product and its source code are available to all. However, the license does not require the authors to waive their copyright to the software.

A GNU General Public License (GPL) is the most popular open source license.  Typical characteristics of this license include the persistence and viral effect of the license. Persistence means that all adaptations of the work must be licensed using the GPL license. In other words, a work licensed with GPL remains GPL licensed even if the work was altered. Viral effect means that combining a GPL licensed work with a work subject to another license leads to the work thus created falling entirely under the GPL. The basic idea is that the permission to use, copy, alter and distribute is granted to everyone who holds a copy of the program. On the other hand, determining separate rights of use is prohibited. Due to its features, GNU GPL is used less in business. The GPL requires that software be distributed or sold with its source code. Similarly, source code must be provided for programs built on GPL licensed programs. However, this is not a problem when developing a program for private use.

The BSD Unix license originally published by the University of California in Berkeley has become widely used in many different altered forms. The most popular BSD-based licenses include the MIT, X and Apache licenses.

Typical for BSD licenses is their fully open nature. BSD licenses are not persistent and do not have a viral effect. They give their users the right to use, alter, copy, distribute and adapt the license terms and conditions. However, the license terms and conditions can be altered only of the work is altered in a way that grants the author copyright to the work. In other words, the work must be altered in a way that creates a new or a derivative work. BDS licenses do not require publishing the source code and they allow altering and reusing the license for commercial purposes also. The license only requires retaining the original copyright information when distributing the derivatives and that the name of the organization that created the original program is not used in marketing.

In legal literature, BSD licenses are recommended for business, but only for parts of software that support the core product where the original author is not interested in developing the parts further. This prevents third parties from "stealing" the software under the BSD license and developing a new product from it and then licensing it with a license that imposes restrictions on its use.

The Mozilla Public License (MPL) was created when Netscape decided to publish the source code for its Navigator browser. The idea was to outsource the open source product development and continue marketing the product as before. MPL was developed for this purpose.

The difference between MPL and other open source licenses is that the original issuer of the work retains a larger portion of the copyrights than the developing community. Thus, the license is persistent with regard to the source code but the original issuer reserves the right to license the object code using any license. The license terms and conditions in the license's source code file cannot be altered even if the code was developed upon. On the other hand, if the file is included in an aggregate work consisting of several files, that work can be licensed using new conditions. In this case, the MPL licensed file must be available with its source code. The conditions of agreement for MPL licenses may vary depending on the type of use (end-use or programming).